An event every week that begins at 12:00 pm on Monday, Tuesday, Wednesday, Thursday and Friday, repeating until December 29, 2021 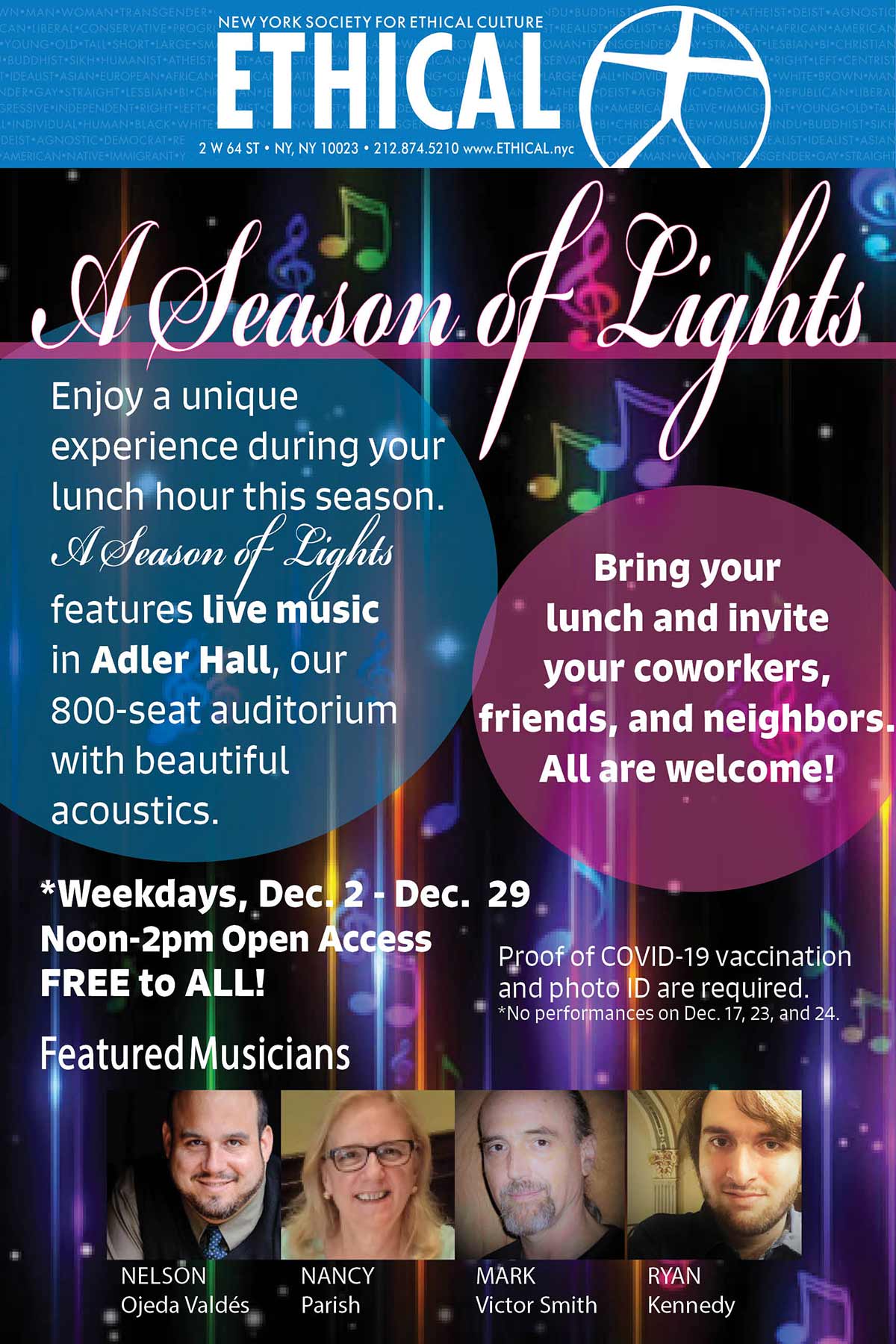 This holiday season, spend your lunch hour in our historic 800-seat Adler Hall!

Beginning Thursday, December 2 until Wednesday, December 29, each weekday* we’re opening our doors and inviting everyone to bring a friend, bring your lunch, and relax while surrounded by beautiful lights and renowned acoustics, with music provided by featured musicians Nelson Ojeda Valdés, Nancy Parish, Mark Victor Smith, and Ryan Kennedy. Ryan Kennedy has become known for his adventurous programming and his transcriptions of orchestral and piano music. Recent performances include Messiaen’s Livre du Saint Sacrement, Ravel’s Daphnis et Chloé, Strauss’ Alpine Symphony, and several of Mahler’s symphonies. In addition, his recent advocacy of the organ music of Milton Babbitt and Kaikhosru Shapurji Sorabji has led to a number of controversial performances both here and in the UK. His recordings have been broadcast on WQXR, BBC Radio 3, and Sveriges Radio. Ryan earned his Bachelor and Master of Music degrees from The Juilliard School, and is currently a doctoral candidate at Yale School of Music. He is the Director of Music at Sacred Heart Latin Mass Parish in Fort Wayne, Indiana, where among other things he improvises the daily Low Mass.
Hear Ryan on December 28 and 29.
***

Nancy Parish has been playing the organ since long before the millennium!  She hails from South Dakota and began her first job as organist on the Coast Guard base of Governors Island in New York harbor.  She is currently organist at St. Gabriel’s Catholic Church in Riverdale/Bronx.  Nancy teaches classroom music and private piano, directs a church choir, has music directed for musical theater, and sings in a small vocal jazz group, Uncommon Chord.  She is delighted to be a part of this program!

Dec. 7 –  A Jazzy Take on Christmas
Dec. 14 – Musical Christmas Around the World
Dec. 21 –  Selections from Tchaikovsky’s The Nutcracker

Mark Victor Smith is a graduate of the University of Michigan, where he studied organ with Dennis Schmidt. He continued his organ study with Ed Mondello at the University of Chicago Rockefeller Chapel. He performed organ recitals, and played at conventions and special events in Chicago, Sarasota, and Albany, while also serving as organist for various churches. On stage, he has performed roles in regional musical theatre venues, performed in opera productions including with the American Chamber Opera Company, and has sung in concert as a professional chorister and soloist. Mark Victor has also taught students piano, organ, and voice, been the music director for musicals, and has been the accompanist for choral groups. His favorite projects are producing A Potpourri of SongK and other concerts, on which he accompanies the singers and performs solo works on organ and piano. He recently took the position as Organist at Christ Evangelical Lutheran Church in Floral Park. Mark Victor is a member of the New York Chapter of the American Guild of Organists.