By ethicalnyc November 3, 2017 No Comments

How many more tears can we shed? What more can be said that hasn’t already been said? Where is the magic incantation that can break this evil spell?

I have no answers, only questions, both rhetorical and existential.

Once upon a time, I believed that we could learn to listen to one another across great divides, that even if we couldn’t love those who hold different views and values, we could respect them and all agree that life, no matter whose, is precious and worth saving.

But what if we know how to curtail gun violence and the majority of Americans want to enact restrictions on gun sales and ownership, but a powerful and well-financed minority prevails?

Last year I gave a platform address called “Gun-orrhea, America’s Most Life-Threatening Social Disease,” in which I cited the latest facts and figures, positions and strategies. On the day before I spoke, one person was killed and seven injured in a shooting in a Florida club; a 26-year old Wisconsin man, who was fired from a grocery store for harassing a 24-year old female co-worker, bought a gun legally and waited for her to leave work to shoot her in the stomach and head, saying “It was easy to kill her because she had ruined my life”; and an 11-year old boy in Tennessee was found guilty of murdering an 8-year old girl with his father’s 12-gauge shotgun because she wouldn’t bring her puppy outside. That was just an ordinary day in the United States of America. Since that day many more people have tragically died, some accidentally and others intentionally.

On the day I wrote this column, a California college student injured in the Las Vegas music festival mass shooting filed a lawsuit against the hotel owners, the concert promoter, and bump-stock manufacturers, claiming they were all liable, and the 9th U.S. Circuit Court of Appeals upheld a landmark decision affirming the government’s constitutional authority to strictly regulate gun shops.

Another part of that ordinary day was former NYC Mayor Mike Bloomberg’s promise to match every donation to Everytown for Gun Safety, a gun control group he created. “US has a gun violence problem,” Bloomberg tweeted. “@Everytown & @MomsDemand are working to solve it. I’ll match every donation. Give now.” I’ve decided to take him up on this. How about you?

What else can we do instead of holding a requiem and solemnly chanting for the dead? In his recent column, “If Only Stephen Paddock Were a Muslim,” Thomas Friedman wrote, “So there is only one remedy: Get power. If you are as fed up as I am, then register someone to vote or run for office yourself or donate money to someone running to replace these cowardly legislators with a majority for common-sense gun laws. This is about raw power, not persuasion.”

Until that day, I’ll listen to our children. One glorious Sunday morning they invited us to the rooftop playground to meet Uliks Gryka, a Sufi mystic who had visited their class. While this dervish donned his robe and prepared to whirl, they chanted lines from Rumi, a 13th-century Persian poet and Sufi mystic:

“Out beyond ideas of wrongdoing
and rightdoing there is a field.
I’ll meet you there.” 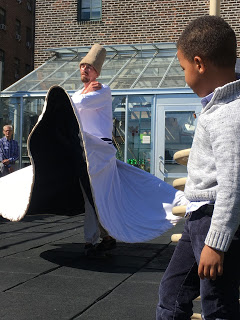 Ethics in the News: “Will America Ever Confront it’s Poverty Issues?” (Online)

Getting to Know You (Online)

Managing in the Time of COVID-19 w/ Dr. Carol Portlock