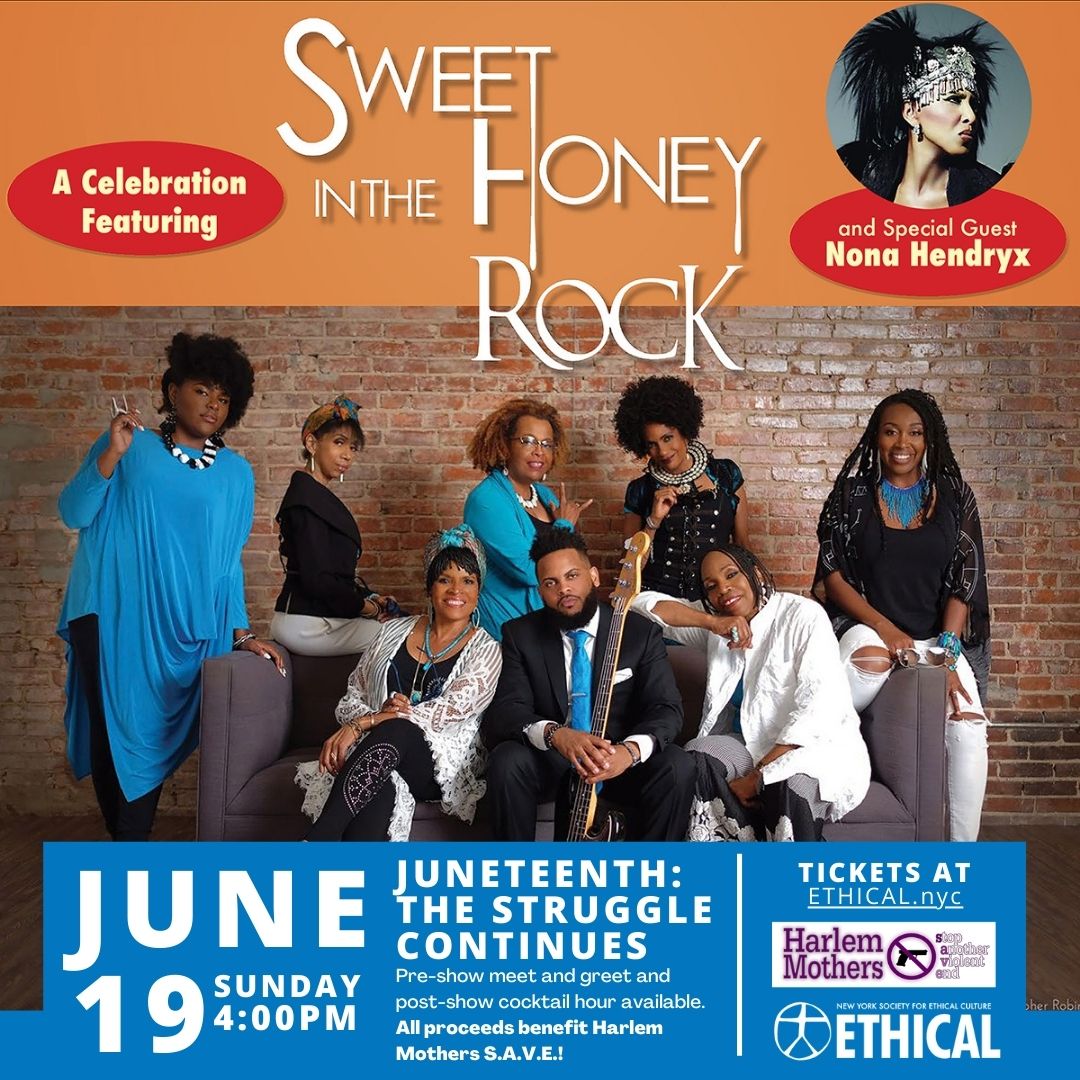 Celebrate Juneteenth with a special performance by the Grammy Award-winning African American female a cappella ensemble Sweet Honey In The Rock and special guest Nona Hendryx! All proceeds will benefit Harlem Mothers S.A.V.E. in their fight to end gun violence.

Juneteenth: The Struggle Continues
Celebrate with Sweet Honey In The Rock® and Nona Hendryx

Notice: Proof of COVID-19 vaccination, photo ID, and mask are required to attend.

Tickets on sale now! Click here to purchase on Eventbrite.

About Sweet Honey in the Rock®

Sweet Honey In The Rock® is a performance ensemble rooted in African American history and culture. The ensemble educates, entertains, and empowers its audience and community through the dynamic vehicles of a cappella singing and American Sign Language interpretation for the Deaf and hard of hearing. Sweet Honey’s audience and community comes from diverse backgrounds and cultures throughout the United States and around the world, and includes people of all ages, economic/education/social backgrounds, political persuasions, religious affiliations, sexual preferences and differing abilities. Visit them online at sweethoneyintherock.org.

In the spirit of two fisted political singer songwriters such as, Nina Simone, and Joni Mitchell, Nona Hendryx tackles social issues, love and politics with a smoky vocal tessitura somewhere between funk and the end of the stratosphere. Hendryx’s legendary career spans six decades of sound and style evolution. Fans know her as a founding member of the girl group, Patti LaBelle & the Bluebelles known as “the Sweethearts of the Apollo Theatre” and inducted into the R&B Hall of Fame in 1999. In the 70s, the group morphed into the Rock & Funk Glam Diva’s ‘Labelle’ with the #1 record, Lady Marmalade. Nona Hendryx emerged as the chief songwriter of the group’s socially conscious and illuminating message songs. If Labelle fans grieved the end of Labelle, Nona Hendryx fans welcomed a new one as the revolutionary art-rock, new-wave goddess embarked upon her own impressive Solo career, which spanned eight studio albums and engaged her with an impressive lineup of collaborators, resulting in top ten hits and a Grammy nomination. Visit her online at nonahendryx.com.

Harlem Mothers S.A.V.E. has been a grassroots movement advocating for victims of gun violence and their families since 2006, organizing marches, town hall meetings, forums, and fighting for sensible and responsible gun laws. They partner with local, city, and state officials and agencies, as well as other community leaders and organizations, to provide victim services to families and individuals dealing with trauma from gun violence. Visit them online at harlemmotherssave.org.

About The New York Society for Ethical Culture

Founded in 1876, The New York Society for Ethical Culture is a non-theistic, Humanist community dedicated to ethical relationships, social justice, and environmental stewardship. A cornerstone of the Progressive movement and a longstanding home for activism in New York City, the Society’s members put ethics in action to organize, educate, and build coalitions to end racism, poverty, and war; abolish the death penalty; welcome refugees and immigrants; fight climate change and pollution, and more. Visit them online at ethical.nyc.