There are myriad problems in this country crying out for our attention: poverty, climate change, and racism, to name a few. Surely, which bathroom one uses is of little consequence, right? Not as far as the state of North Carolina is concerned. In March it passed a law restricting public restroom access to the sex cited on a person’s birth certificate. This was a first, and it drew immediate condemnation, but other states and localities are considering similar legislation.

Having lost a long battle to prevent the nationwide legalization of same-sex marriage, social conservatives have turned their attention to transgender rights and efforts to allow certain types of anti-LGBT discrimination based on religious beliefs. They contend that expanding anti-bias protections to bathrooms and locker rooms increases the risk of sexual predators molesting women and girls on those premises.

This myth persists in spite of the fact that experts, including law enforcement officials and advocates for victims of sexual assault, have called it baseless. Research has shown that women are no more vulnerable in public restrooms than in any other public space. Furthermore, since sexual assault and harassment are already illegal, this legislation is unnecessary. Once again, women are used to “shield” social conservatives from their real motivation. It is a strategy used throughout U.S. history to discriminate against marginalized groups for the sake of “women’s safety.” As Dru Levasseur, Transgender Rights Project director for the LGBT-rights group Lambda Legal, said “It gets down to prejudice and it’s not based on any kind of reality.”

In early May, the Justice Department threatened to sue North Carolina, or strip some of its federal funding, if it did not scrap its divisive law. North Carolina’s governor responded by suing the Justice Department, accusing it of “baseless and blatant overreach”—and of  “being a bully.” This prompted a counter suit, describing the restroom restrictions as “impermissibly discriminatory.” Then, on May 13, the Obama administration issued a letter to every public school district in the country directing them to use the bathrooms that match their gender identity. While lacking the force of law, it contains an implicit threat of lawsuits and loss of federal aid.

If you are confused by all of this, I suggest you visit the Lamda Legal website. There is a downloadable FAQ: Answers to Some Common Questions about Equal Access to Public Restrooms at http://www.lambdalegal.org/know-your-rights/transgender/restroom-faq. It includes these definitions: “Transgender refers to people whose gender identity, one’s inner sense of being male, female or something else, differs from their assigned or presumed sex at birth. . . Gender-nonconforming people don’t meet society’s expectations of gender roles.” Identity and expression should also not be confused with sexual orientation. There is a difference between knowing who we are and knowing whom we love.

The odds are great that you know and interact with these people; they don’t wear labels. But now social conservatives want them to wear labels and carry IDs before entering public restrooms.

So much for politics. Now what about ethics? Last month I met with two young transgender men to discuss starting a support group for their peers who feel unwelcome at LGBTQ settings where “We are asked to check our masculinity at the door.” “What does that even mean?” they want to know. They want to be seen as individuals, not as labels. Don’t we all want that? I often think of the words of Ethical Culture founder Felix Adler that I use to close my guided meditation: “The spiritual nature, the best in each person, does not need to be saved, it needs to be recognized.” Everyone longs to be recognized as a person of worth and dignity. We have it within our power to grant that wish.

Finally, the most ethical statement was made by Attorney General Loretta Lynch:

This action is about a great deal more than just bathrooms.  This is about the dignity and respect we accord our fellow citizens and the laws that we, as a people and as a country, have enacted to protect them – indeed, to protect all of us.  And it’s about the founding ideals that have led this country – haltingly but inexorably – in the direction of fairness, inclusion and equality for all Americans.

To which I can only add “Amen.” 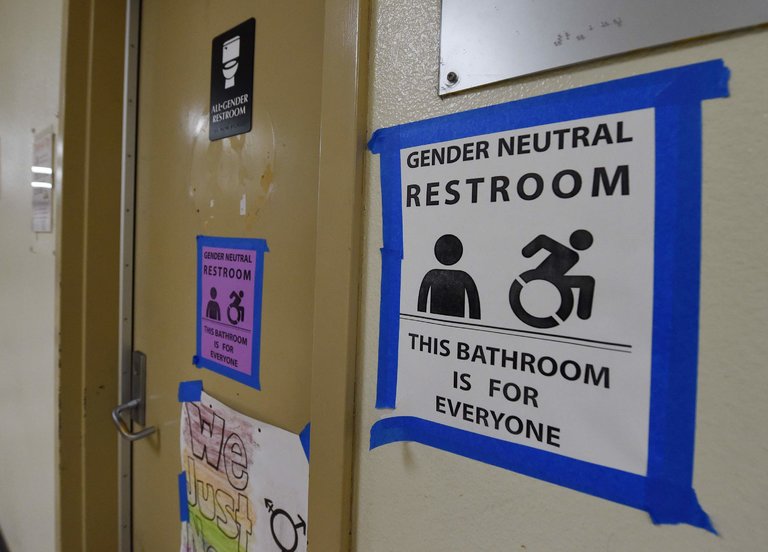